So this is why nobody seriously tries to build a time machine. It's not because of causality paradoxes or the lack of traversable wormholes. No, it's because why would anyone bother when stuff like this clearly proves that everything before Al Gore invented the Intertubes sucked balls:

So it's been a very hectic last couple of weeks...

Posted by Gil Trevizo at 1:14 AM No comments:

So Obama did an interview on HBO's Real Sports, discussing his love of basketball, and said:

No, but I do think you can tell something about people from how they play basketball. For example, people who keep on shooting even though they have no jump shot. You can tell that there's a certain self-delusional aspect to their game. Right? That says something about who they are.

Another reason why Obama is my horse in this race: not only does he come off as human and likeable, but he also finds the most subtle ways to get in digs at his opponents.
Posted by Gil Trevizo at 1:49 PM No comments: 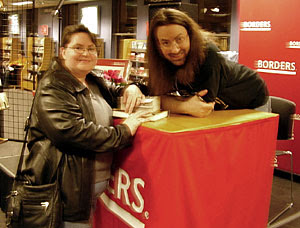 So, on Friday, Jeannine and I went into San Francisco to attend Jim Butcher's book signing for Small Favor. Jeannine has been a big fan of his Dresden Files series ever since watching the now-cancelled television show based on those books. I enjoyed the series too, but I can't say I'm really a fan. I've only ever been to one other book signing, that one with George R.R. Martin. Whereas Martin seemed tired and perfunctory, Butcher was lively and conversed candidly with the fans. There were a surprising number of questions about upcoming The Dresden Files role-playing game, and I was a little shocked to hear that it won't be coming out until sometime next year. This is odd as I'll be playing in an alpha-stage playtest later this month, so I thought it'd be closer to release. I wanted to know how close the game would hew to other Evit Hat games like Spirit of the Century, but didn't ask figuring I'd find out in a couple weeks time anyways. A recent post from Fred Hicks' livejournal implies that it'll be Fate-based, so the SotC Aspects and Stunts system may see play in Dresden as well.

Jeannine seemed to have a great time, which means that I had a good time. I'll be reading the Dresden Files books before I run the game, so maybe I'll then find out for myself if he's a good writer and the books are worthwhile. If the books are anything like the author himself, they should be very geeky and very fun.
Posted by Gil Trevizo at 12:58 PM No comments: