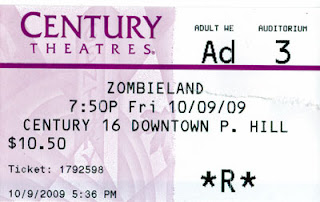 This was a very stupid movie. An awesomely stupid movie. And, between this and being dragged to see G.I. Joe, I am now convinced that stupid movies tend to attract stupid audiences. Zombieland was no different, and as every zombie got killed and dismembered in an ever wider variety of cartoon violence, this audience of Neanderthals cheered it on like grape-gorged Romans screaming for blood in the Coliseum. It was mindless gore-porn, without plot or meaning or certainly anything approaching art.

I loved every fucking minute of it.

Sure, it can't beat 28 Days Later for nihilistic horror, or even Shaun of the Dead for managing to be both funny and a real movie with actual characters and plot. Nebbish Geek hooks up with Redneck Wahoo, they fall in with Hot Chick and Spunky Kid, they drive to Los Angeles, have a zombie celebrity cameo, do something really stupid to move the non-existent plot along, and then kill a lot of zombies. That's it. If you're pissed that I just spoiled the plot for you, when it comes to Zombieland, you're doing it wrong. Forget character, forget plot, this is about laughing at carnage and nothing else. It ain't much - but just as Tallahassee feels about Columbus - it'll do, pig.
Posted by Gil Trevizo at 9:54 PM No comments:

Dr. Octopoid, Occult Detective From Beyond Space and Time! 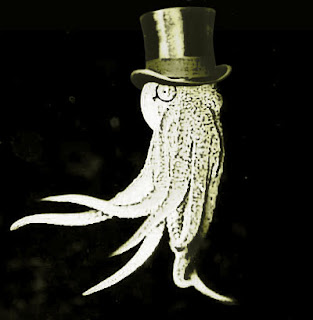 Sounds silly at first, but consider this rewrite: in the last years of the twenty-first century, as civilization collapses due to an apocalyptic Ice Age, a small band of scientists use time-travel technology to send the consciousness of one of their own back in time to prevent this coming catastrophe. Now trapped in the body of a giant octopus, the futuristic Doctor, armed with hi-tech psychic powers that allow him read the sensations of memory by touch and control the minds of lower life-forms (like his flying army of falcons), plots from his tank in the basement of a Victorian funeral home, where he builds, with a workforce of cadaverous conscripts, giant rockets underneath London that will push the Earth further towards the Sun and save mankind from an icy demise two hundreds IN THE FUTURE!

And he also solves crimes and shit with the help of his plucky monkey assistant and a hot corset-wearing suffragette.

And he's allergic to bat tongues.
Posted by Gil Trevizo at 3:52 PM 1 comment:

Once I Lived For Hate... 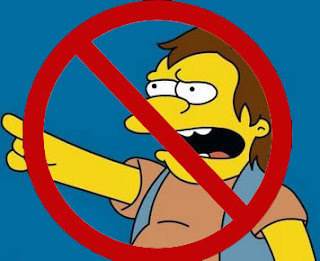 ... but now I live for suck. For years, my entire enjoyment in watching the NFL has been based on schadenfreude. Sure, I've rooted for the Pats and the Steelers on occasion, but what really gets me off is the annihilation of those teams and players I detest. I hated Peyton Manning, and I watched him win a Super Bowl. I hated his brother, Eli, and watch him hoist the Lombardi. I hated Brett Fav-ruh, and am watching him tonight prove true the douchebags of ESPN. I can hate no longer. I must choose a team and stick with it, so I flipped a coin to choose between my two "home" teams.

And, starting tonight, I am officially a fan of this guy's product. 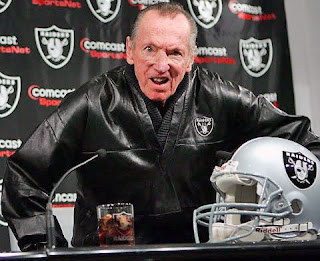 May God have mercy on my soul.

At least no one will accuse me of being a fair-weather fan. The starting quarterback has a passer rating lower than some major leaguer's batting averages. The head coach could soon be up on assault charges for knocking out his own assistant. The owner is so batshit-crazy old, I think his face has literally begun to melt. But, hey, at least I can now say I am rooting for something. That's a positive thing, right?