Southern California: An Island on the Land 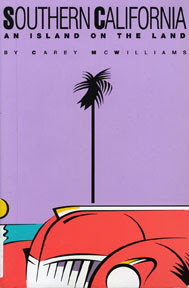 Carey McWilliams "interpretive history" of Southern California from the appearance of the Spanish missions to the time of its first publication (1946) reads less like a history than a series of articles. This is no surprise, as McWilliams was primarily a journalist, but this is not to say that it reads like a reheated compilation of old work, such as that of other newsman who turn to the long form. Rather, McWilliams' book reads more like the history section in a Fodor's or Lonely Planet guidebook: ruthlessly condensed, lacking in sources, but readable and, if not factually accurate, then something that sounds true.

Each section focuses on a specific topic, from race to weather to socioeconomics, and McWilliams never blatantly attempts for a narrative except a constant theme that Southern California is a much darker place than it appears in the propaganda of city boosters, tourism boards, and Hollywood. That seems rather unnecessary, considering the modern popular vision of Southern California is that of a polluted suburban hell-hole plagued by gangbangers and yuppie douchebags; but in 1946 this was probably shockingly original. It is easy to see how this book supposedly provided Robert Towne with the inspiration for Chinatown (even though the water wars get little attention in the actual pagecount).

I liked the book and sense the truth in much of what McWilliams is railing against (his point-of-view is very pro-labor and progressive, and he portrays the strike-breaking and racist mobs of yesteryear in a distinctly, and probably deserved, bad light), but the lack of sources render it less than ideal as a history. That said, some of what it has to say remains strong, even over sixty years after it was published. McWilliams' description of the hard lot of Mexicans, both immigrants and native-born Californians, as perpetual outsiders hostile to assimilation, remains as much a glaring wound as it did then, and his interpretation is sadly better layered than today's simplistic "good guy, bad guy" viewpoints. His description of Southern California as a series of busts and booms seems like it could be extrapolated to the state as a whole (at least the urban centers), and that might be as much a part of the Californian identity as the "everyone is a immigrant here" meme. And, for those so inclined, there is a whole chapter on occult weirdness that is a must-read for anyone setting a Call of Cthulhu game in Southern California during the twenties and thirties, not so much for details but for the zeitgeist of the period.

All in all, a good read. I just wish he had included some footnotes.
Posted by Gil Trevizo at 10:27 PM No comments:

All The Cool Kids Are Doing It

I am listening to Paramore while looking over my brand-new Facebook page. I am either very with it for my age, or an inappropriate old man.

I do not feel with it for my age.
Posted by Gil Trevizo at 11:05 PM No comments:

This movie was supposed to suck, but boy did I enjoy the hell out of it. I am, as my friends have told me, a notoriously picky reviewer. I consider films like Schindler's List and American Beauty to be facile and devoid of serious introspection. And yet I liked Push, which I can only describe as X-Men meets Twilight in Hong Kong. That sounds absolutely awful, but it works. This is a movie goes straight for your adrenal glands, not your head, and, while the pace never lets up, it's not a monotonous bore-fest like The Dark Knight.

The basic premise is covered during the title sequence: Nazis experimented on babies to create psychic powers, Americans carry on the research, creating a whole class of superhumans - "movers" (telekinetics), "sniffers" (folks that can read images from smells), etc. Now the psychics are escaping various government agencies that experiment on them to enhance their powers as Persons of Mass Destruction, experiments that have always killed them up until now. It all sounds very RPG (I can see the splatbooks already), so that's maybe why I liked it so much. Getting that exposition out of the way in the first three minutes also means that there is no time wasted dealing with mundane reactions to a preternatural world: the crazy psychic shit is considered matter-of-factly. That makes the film seem even more like an RPG on the big screen.

Everyone I've mentioned Push to says they thought it would be like the excrable Jumper, but what seperates those two are the characters and acting. Unlike the unlikeable douchebags in Jumper, all the good guys in Push are really good guys, acting not out of self-interest but because they don't want to see their friends get hurt. And whereas Hayden Christiansen can be out-acted by a block of cheese, Chris Evans can actually deliver a performance (also check him out in Sunshine if you can't get past the Johnny Storm thing). Dakota Fanning gives her typically weird "adult in child's body" thing, but it works for her character and she only stumbles when she tries to play drunk (somebody should've loaded the kid with booze and called it Method). The supporting characters are likewise strong, with only one real shit performance coming from the vapid Camilla Belle, but she spends so much time off-screen that it does no real harm.

The flick does stumble a tad in the last third, where it goes all Oceans' Eleven as the characters have to "con themselves" to avoid precognitive psychic knowing what they're going to do as they do it; but, I kept up with it and admired that they put some serious thought into how these powers work. It was a solid, fast-paced action flick, and while it's not going to win an Oscar or save Darfur, it was a damn good time.
Posted by Gil Trevizo at 11:17 AM No comments: 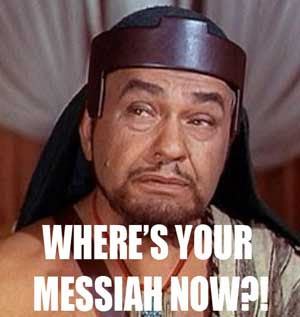 About two minutes into this game, I turned to Jeannine (trembling with fear in her Ben Roethlisberger jersey) and declared that if the Steelers lost this game, I was done with football. No more watching the games, no more rooting for "winners" that fall apart at the last moment, and most of all, no more schadenfreude - the joy of watching those icons I hate crushed in defeat. I am a bitter little man, and get most of my pleasure from from watching people with vastly greater talent, character, and accomplishments than me have their dreams ground into dust. These last few Super Bowls have been hell for me: the Manning brothers, who I felt were frauds forced on us by the League and a sports media that craved the archetypal white, Southern pocket-passer, showed they were the real deal. Now it looked like Kurt "I love the retards unless they need the stem cells" Warner was headed for a second Super Bowl victory and I was being told by some Higher Power that a) "I exist, dumbass" and b) "I hate you and everything that you like." But instead, God is dead, Jeannine has now spurned the Raiders and declared the Steelers her first love, and I have all that I want from professional sports: gloating.

Life is good.
Posted by Gil Trevizo at 7:50 PM No comments: