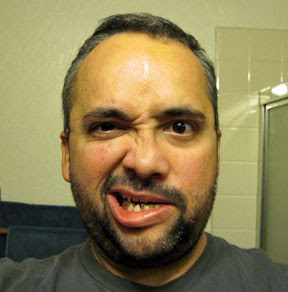 That's probably not fair, as PacifiCon 2010 wasn't that bad, at least not the half I was able to attend. I ran my game on Friday, played in a couple of games on Saturday, and woke up on Sunday to find half of my face had gone dead. Luckily, it was just my face (and not the rest of my body, which would suggest a stroke) and, following a visit to my local emergency room, I was diagnosed with Bell's Palsy, an almost-certainly reversible but highly-annoying disease that is a lot more common than I realized. As I write this, I still can't make a proper smile, but I am getting better and expect a full recovery by the end of the month.

PacifiCon 2010 was pretty much the same as PacifiCon 2009: same hotel, same sign-up procedure, same dwindling number of role-playing gamers. The big difference between last year was the number of games. There were about 47 RPGs at Pacificon this year, whereas there were something like 120 games at KublaCon and almost certainly more than that at DunDraCon. It also didn't help that the games were poorly scheduled (there were more RPGs scheduled for Friday afternoon before people got off work than there were for Friday evening). Now, with such a small number of gamers and an equally small number of games, PacifiCon is looking more and more pointless, especially as there will be a new weekend gaming convention in October next year.

As for what I played:

The Last Flight of the Cathay Clipper (Call of Cthulhu: Delta Green)
My game, running it for the last time. A good time seemed to be had by all, and the game itself unfolded in some different ways than it had previously. I still think it's always been a good premise in need of a much reworked climax, but I'll never run it again.

To End All Wars (Savage Worlds)
This was a pretty straightforward pulp game where the characters (stock two-fisted heroes) found out about a Nazi plot to gas the Lincoln Memorial from a zeppelin and foiled the plot. The GM didn't have enough characters so I ended up creating one (a Chinese teenage baseball player named Wide Load). It was short but fun, and I got to play more Savage Worlds, which is good because it's the system I'll be running at the Dead of Winter convention this December.

Gre'thor Rising (FASA Star Trek)
We were a bunch of Klingon officers (I played the Captain of Marines) commanding a fleet of warships to recapture a lost vessel and destroy a nest of mutinous separatists. The system is quite old (percentile-based with the highest skills in the 50's) and the GM was very old-school (must roll to do pretty much anything). Ordinarily, this kind of game would've been my fifth or sixth choice on a schedule, but beggars can't be choosers at PacifiCon. Nevertheless, it was a surprising amount of fun, primarily because the GM had crafted a nifty starship combat system onto the game (and every player got some role to do, either handling some part of ship operations or commanding a lesser vessel in the fleet). Once I had recognized the parameters of the "fun" in the game, I focused on that and ended up having a great time.

The next morning, I got into an ICONS game run by a good friend of mine, but very early on I realized that there was something seriously wrong with my face and I would need to see a doctor, so I had to bail out. That was a shame, as that ICONS game and a later Cthulhu Dark Ages game were pretty much the only things that really looked interesting to me on the schedule (or I had not already played at a previous convention).

I repeatedly stated at the con that this PacifiCon might be my last. It's just not worth the hotel expense for so few games (and so few gamers). However, my plans for 2011 also included a pilgrimage to GenCon, and with my sister getting married next September, that's looking much less likely. So, I may end up attending PacifiCon 2011 after all, although if I do, I'm thinking I may just ignore what little RPGs are available and concentrate entirely on wargaming, something I've never tried before.
Posted by Gil Trevizo at 7:05 PM No comments: