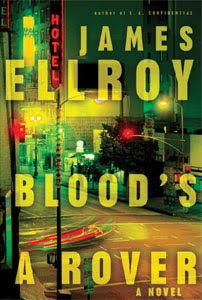 Even though Blood's a Rover, the conclusion of James Ellroy's Underworld U.S.A. trilogy, is not a bad book, there's no way I can recommend it to anyone that hasn't read the first two books. While it might stand on its own, it doesn't really do anything that American Tabloid didn't do better, and the book ends up working best as part of the greater work than a standalone story.

Taking place between 1968 to 1972, the novel moves from the cover-up of government and organized crime conspiracies in the assassinations of RFK and MLK (the subject of the previous novel, The Cold Six Thousand) to an attempt by the Mafia to set up a Cuban-styled wise-guy wonderland in the Dominican Republic while the FBI attempts to destabilize fringe black-power revolutionaries with undercover agents and heroin trafficking. Tying it all together is a 1964 armored car heist and the ubiquitous presence of the "Red Goddess Joan," a female post-Grapes Tom Joad with a mysterious vendetta against J. Edgar Hoover.

The protagonists include: Wayne Tedrow Jr., fresh off of murdering his Mormon racist publisher father in The Cold Six Thousand and now serving as a bagman to both the Mob and Howard Hughes; Dwight Holly, a minor character also from the previous novel transformed from a cardboard thuggish FBI caricature there to a conflicted leftist sympathizer here; and Don Crutchfield, a young L.A. wheelman/peeping tom who quickly becomes enmeshed in the various plots that permeate the book. A couple other perspectives are clumsily brought into the narrative in the last third of the book, but it's these three that fuel the story to varying results. Tedrow is basically a shadow of his character from The Cold Six Thousand, and his chapters make up more of an epilogue to that book than anything compelling new in this one. It also doesn't help that, in that book, Tedrow's character was most interesting in relation to the other protagonists, and here he's equally dry. Holly is the classic Ellroy "killer with the heart of pyrite," cut from the exact same mold as Kemper Boyd in American Tabloid and Ward Littell in The Cold Six Thousand, with similar results. It's a great character, but it's beginning to feel like Ellroy has come back to that well one too many times. Crutchfield is best thing about Blood's a Rover, not the least interesting of which is that he's an actual guy. Based on Ellroy's history (his murdered mother, his criminal record as a peeping tom), the Crutchfield character feels like the closest thing he's ever written to his own self, and the novel is at its most raw and original when it focuses on him. How Ellroy uses Crutchfield in the last pages perhaps speaks more truly to his own politics than anything the author's actually said, and how Crutchfield himself speaks of his own fate at the very end might have something meaningful to impart on the arc of Ellroy's own fiction from the L.A. Quartet to now.

Overall, I enjoyed Blood's a Rover, but it does have some problems. A voodoo murder that parallels the investigation track into the armored car heist comes off as flimsy and tacked-on, almost as if Ellroy were making some perfunctory nod to the L.A. Quartet books. The revelation behind Joan's longtime hatred of Hoover is rather pedestrian. The murderous LAPD cop character of Scotty Bennett that becomes a major character halfway into the book feels like Ellroy resurrecting a fatter, dumber version of Dudley Smith. The terse telegraphic style of prose from the previous two books is still here, but where it was intense in the rich story and characters of American Tabloid it only points out the less adequate elements of Blood's a Rover. Ultimately, Pete Bondurant's final scene in The Cold Six Thousand was an effective end to the Underworld U.S.A. story, while Blood's a Rover makes little more than a satisfying but unnecessary epilogue.
Posted by Gil Trevizo at 11:47 PM No comments: 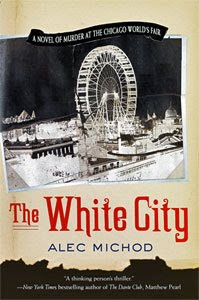 The White City by Alec Michod is pure shit. The author can't write: his characters act like he scripted them with Mad-Libs, the prose is equally turgid and confusing, there is no mystery, and he doesn't do anything interesting with the setting much less explore its themes. I could give a synopsis of the plot and explain, point-by-point, why this hack should never be allowed to publish anything ever again, but this book was so utterly lacking in value that I can't even muster the disgust to go into why. Let this simply be a warning to those that might care: do not read this book.
Posted by Gil Trevizo at 6:33 PM 2 comments: