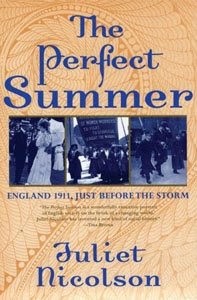 Subtitled "England 1911, Just Before The Storm", I read this non-academic history as inspiration material for the P Division Call of Cthulhu campaign I'm in the process of brainstorming. I'd hoped it would live up to the title and provide of a portrait of Edwardian life on the brink of the cataclysm that would soon engulf the world, but what I got instead was a superficial sketch of English socialites and assorted rich folk dawdling about in the midst of an abnormally hot summer.

The 1911 summer was certainly eventful enough in England, with the passage of the Parliament Act that officially established democracy in a country that had been lurching that way in fits since the 17th century, divisive fights over Home Rule in Ireland, women's suffrage, trade unionism, and a growing crisis with Germany that solidified the Anglo-French alliance leading towards the war that would wreak Europe three years later. All of these things are touched on, but that touch is utterly inconsequential. The author, Juliet Nicolson, is more concerned with the adultery and mild scandals of the noble class, which would all be fine and good if she focused on that subject and brought some meaning out of it. Instead, Nicolson gives it all the attention of a contemporary society page, foregoing any attempt at historical context. Her apathy is the ruin of the book, which fails so utterly that the only attention she pays to "the Storm" is to end with the wartime death of a character she writes all of one paragraph on in the 294 page book. This was crap, a slog to get through, and a waste of my time.
Posted by Gil Trevizo at 8:37 PM No comments: